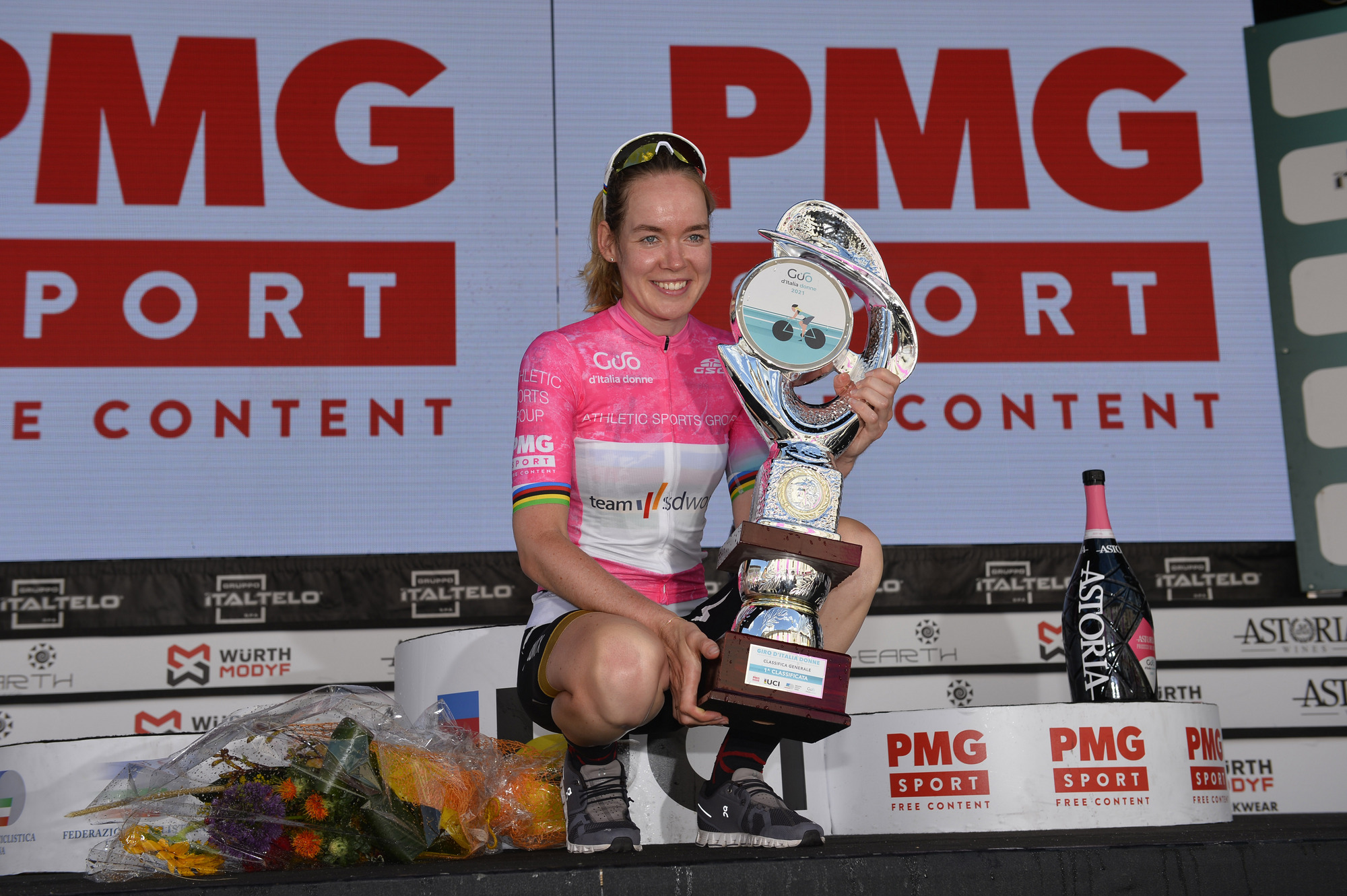 The 32nd edition of the Giro d’Italia Donne ended today in Cormòns. The winner of the Maglia Rosa 2021/ASG – ATHLETIC SPORTS GROUP is Anna van der Breggen (TEAM SD WORX) in 27h0’55”. Behind her, in the General Classification, second and third respectively, are teammates Ashleigh Moolman-Pasio at 1’43” and Demi Vollering at 3’25”. For the 2021 champion it is an undisputed poker: her victory in this edition is added to those of 2015, 2017 and 2020.

The SD WORX Team thus wins the ranking as the best team, proving to be the most competitive: in addition to the podium of the general, it also scores the double hat-trick on the stage podiums in Prato Nevoso (2nd  stage) and in Monte Matajur (9th stage).

The statement of the winner of the 2021 edition Anna Van der Breggen (SD WORX TEAM): “There was no better way to finish this race than in the Maglia Rosa. It was a really great feeling during an incredible race”.

In the challenging stage that concluded the 2021 Giro d’Italia Donne, from Capriva del Friuli to Cormòns of 113 km, Coryn Rivera (TEAM DSM), with a time of 2h56’40”, beats the runner-up Elizabeth Deignan (TREK – SEGAFREDO) in the final sprint. On the third step of the podium is Elise Chabbey (CANYON//SRAM RACING) in front of the Maglia Rosa, Van der Breggen (at 3”). It is the third stage victory for Team DSM.

The statement of stage winner Coryn Rivera (DSM TEAM): “I dedicate this success to my two men, to my father who is no longer with us and to my boyfriend whose birthday is today. I feel very strong, this victory is a great motivation for Tokyo”.

The 32nd edition of the Giro d’Italia Donne, the first one organized by PMG Sport/Starlight, ended in Cormòns; the most prestigious competition in the world of women’s cycling, which from 2022 will be reintegrated in to the UCI Women’s World Tour, this year followed in over 150 countries, from 2 July saw the participation of 144 athletes from the best 24 teams in the world, including the 9 teams of the UCI Women’s World Team, in a 10-stage route along 1,022 km through the scenic and artistic beauty of Piedmont, Lombardy, Veneto, Friuli-Venezia Giulia.

“First of all, I would like to thank Anna van der Breggen and all the great athletes who have offered an unforgettable sporting show in these 10 days – says Roberto Ruini, founder of PMG Sport and General Manager of the Giro d’Italia Donne. “From day one as general manager, I set myself the goal of creating a Giro d’Italia Donne capable of making the most of their professionalism and sporting quality. Although we will finish collecting distribution data in the coming weeks, I can already say today that this is the most viewed edition of the Giro ever. This is another important result that confirms an increasing national and international attention towards this splendid and unique stage race. A result on which over 200 people have worked in these 11 days, whom I thank one by one, because the success of an event is the result of the work of a team. I thank the stage committees for the effort and welcome they have given to this edition and I thank Giuseppe Rivolta, Claudia Evangelisti, Ginevra Cividini and Paola Mongini who shared joys, concerns and responsibilities with me. This is a goodbye to the 2022 edition”.

The Giro d’Italia Donne 2021 was organized by PMG Sport/Starlight, in partnership with UCI and the Italian Cycling Federation.