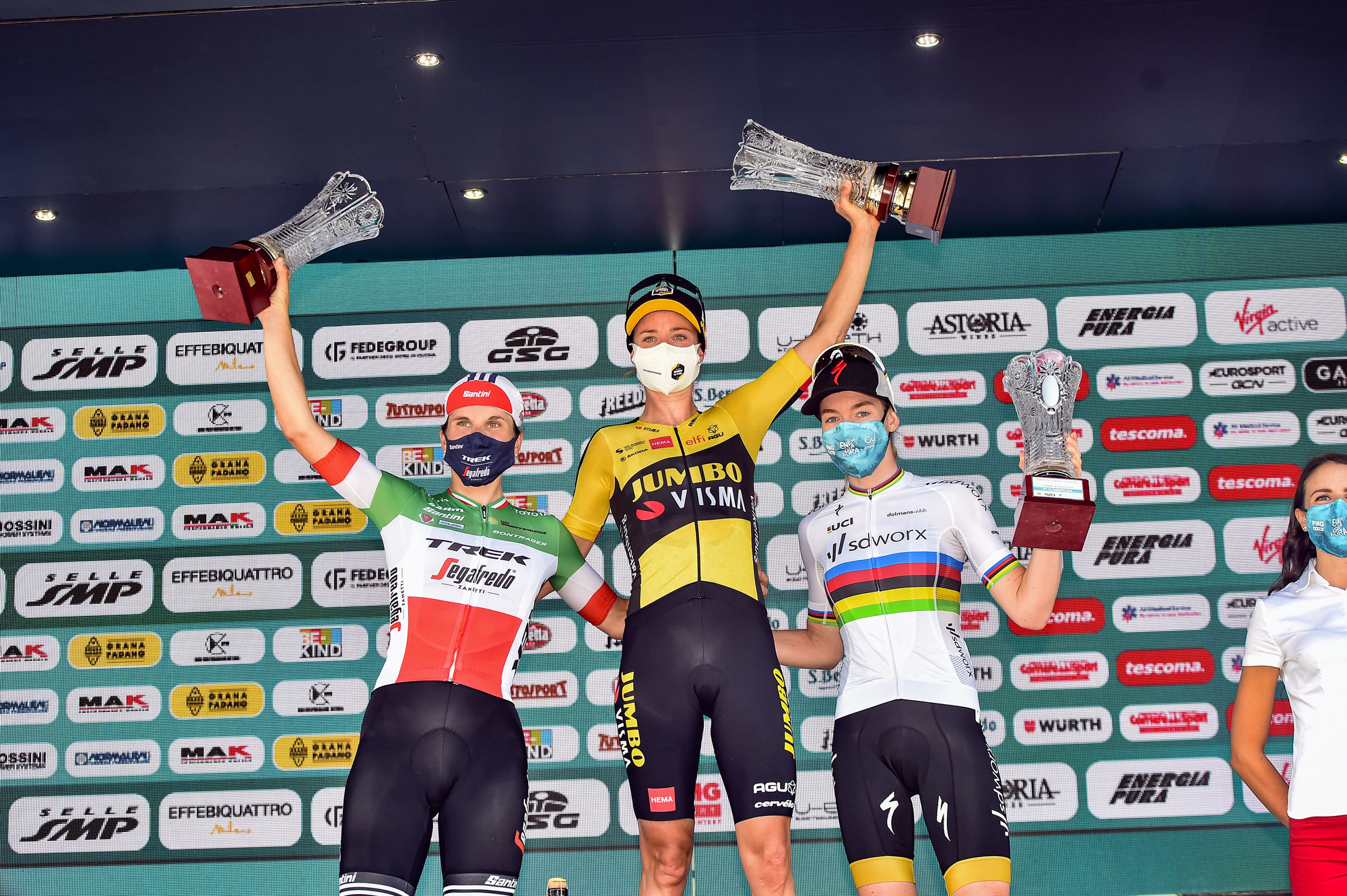 Marianne Vos gets the better of the final head to head with the Italian Elisa Longo Borghini. Placed third is Anna van der Breggen who maintains the leadership of the general classification. Lucinda Brand is the new Maglia Verde. Tomorrow’s stage, from San Vendemiano to Mortegliano, is the only one that crosses two regions starting from Veneto and arriving in Friuli-Venezia Giulia, on a flat route of 129.4 km

Marianne Vos (JUMBO-VISMA WOMEN TEAM) wins the 7th  stage , of the international race, the last one in Lombardy. On the 110 km-long route from Soprazzocco di Gavardo to Puegnago del Garda, in the province of Brescia, in a challenging and uneven track with an arrival characterized by a final circuit repeated five times for a total of 5 GMP (third category Mountains Grand Prix) , it is the Dutch athlete who wins in the final duel with Elisa Longo Borghini (TREK – SEGAFREDO), the first Italian on the podium of the Giro 2021. On the third step of the podium is Anna van der Breggen (SDW – TEAM SD WORX) who confirms the leadership in the general classification. Lucinda Brand (TREK – SEGAFREDO) protagonist of today’s lead is the new Maglia Verde.

A nervous stage made spectacular by the numerous attacks and counterattacks of the day. At the last kilometer it is the Italian Elisa Longo Borghini who starts acting. The immediate answer comes from the color-bearer of the JUMBO-VISMA WOMEN TEAM who then has the better of the finish line, crossed at 2 hours and 48 minutes. For Marianne Vos this is the second success in the 2021 edition after the Ovada stage and the thirtieth in the women’s race: she is the most successful athlete in the stage race.

The winner’s statement: “It is an incredible victory because I had not in the least thought it could happen. At the Giro every day is a new day and you have to be ready to fight. I think my team has been really inspiring to get me in the right position and give me the chance to have the right concentration to take me to victory. The Giro d’Italia Donne is always special for me, I feel good in the races, I feel special vibrations”.

Chronicle of the Race – The first action of the day is by Matilde Vitillo (BEPINK) and Riejanne Markus (JUMBO-VISMA WOMEN TEAM) who break away from the group to reach a lead of 1’23”. Their attempt is then aborted. On the counterattack Lucinda Brand (TREK – SEGAFREDO) passes first at the 2nd GPM, preceding the Maglia Verde. At the end of the second lap, the group is at 1’21” behind the runaway. The Dutch Brand’s advantage decreases to 1’03” at the end of the third lap. Five counterattackers then reach the runaway: Alexis Ryan (CANYON//SRAM RACING), Eugénie Duval (FDJ NOUVELLE-AQUITAINE FUTUROSCOPE), Sofia Bertizzolo (LIV RACING), Leah Thomas (MOVISTAR TEAM WOMEN), Coryn Rivera (TEAM DSM). The group is compact again when there are 23 km left. There is an attempt, 20 km from the finish line, by Marta Jaskulska (LIV RACING) with an acceleration. At the start of the last lap, the group is compact again and the SD WORX TEAM sets the pace. Very active, in the first group of 25 athletes, is the Maglia Bianca Niamh Fisher-Black (SDW – TEAM SD WORX) where the Maglia Rosa is also present. It is then Marta Bastianelli (ALÉ BTC LJUBLJANA) who attempts the solo action when there are 8 km to go but the TREK – SEGAFREDO closes the Italian’s attempt and sets the pace together with the Team DMS. At the last kilometer, Elisa Longo Borghini launches the attack and it is Marianne Vos who responds. In the final head to head, the Dutch cyclist prevails. Place of honor for Longo Borghini, placed second and Van der Breggen, placed third.

Tomorrow, Friday 9 July, 8th STAGE from SAN VENDEMIANO to MORTEGLIANO. The only one in the Giro d’Italia Donne 2021 that crosses two regions, starting from Veneto and arriving in Friuli-Venezia Giulia with a route of 130 km, flat with a finish suitable for sprinters. The cyclists will start from San Vendemiano (TV) at 12.05 pm, a municipality bordering Conegliano, just below the Prosecco hills, declared a Unesco Heritage, to continue crossing the palü, a natural landscape with marshy areas, and touching the small towns of San Fior and Codognè. At Brugnera, the stage moves to Friuli-Venezia Giulia where it also goes in the municipalities of Prata di Pordenone, Azzano Decimo, Fiume Veneto, San Vito al Tagliamento and Sesto al Reghena, as well as passing through the Livenza and Tagliamento rivers. The race ends in the province of Udine with two laps of a circuit that goes in the municipalities of Talmassons, Bicinicco, Lestizza and, the final destination, Mortegliano.

The 7th stage can be seen on TV today, Thursday 8 July on Rai Sport HD at 8:15pm with the best of the stage in 50’ e on Rai2 with 10-minute summary during Tour Replay. Tomorrow, Friday 9 July on Eurosport 1, recorded broadcast at 10:00 am