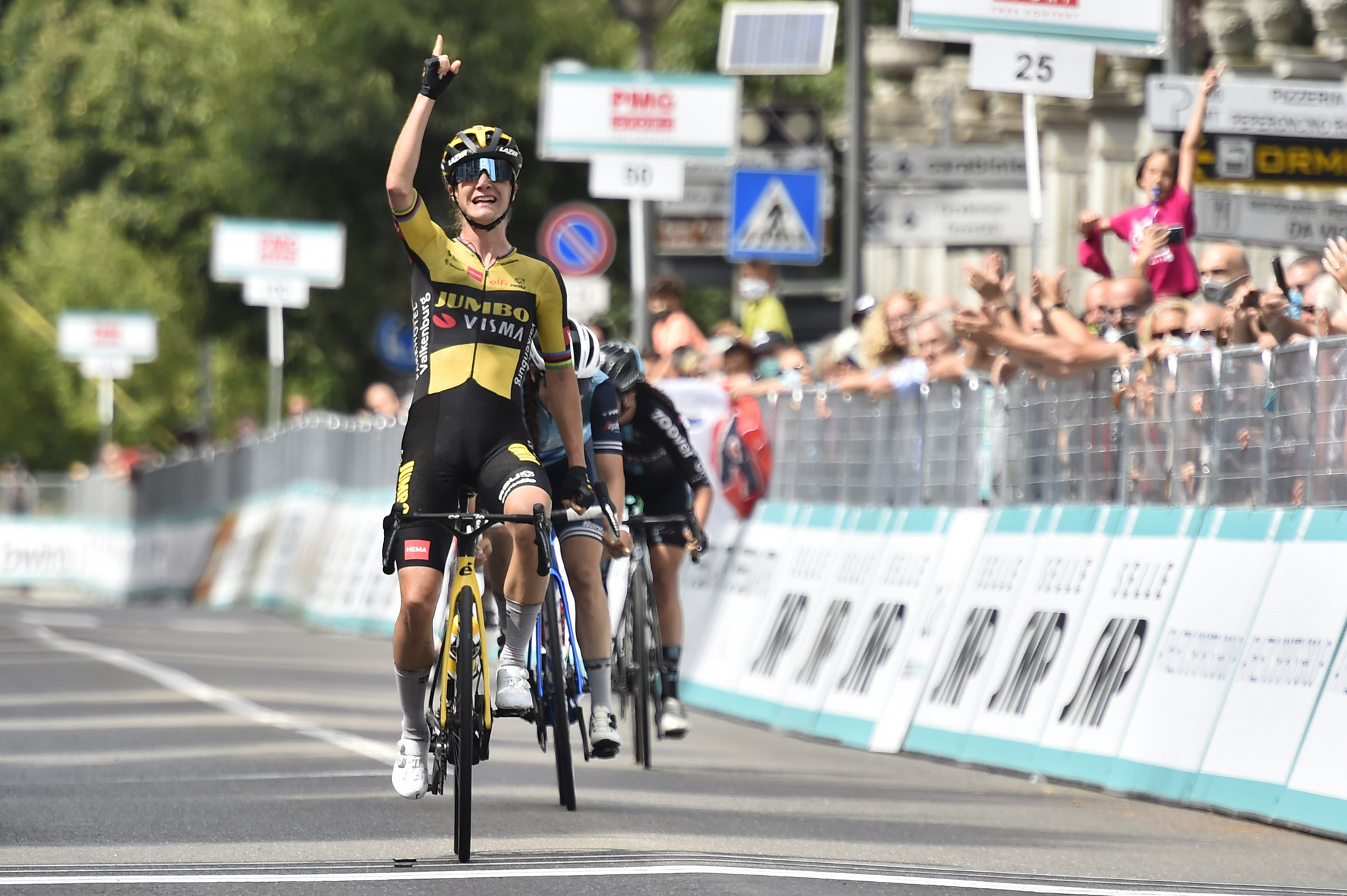 Marianne Vos wins in Ovada ahead of Lucinda Brand and Liane Lippert, placed second and third. Anna van der Breggen keeps the Maglia Rosa. Tomorrow the individual time trial, the last stage in Piedmont, of 11.2 km from Formazza Fondovalle (1,210 m) to Formazza Riale, Cascata del Toce with an altitude difference of over 500 m and arrival at 1,714 m (Cima Coppi).

It is the color-bearer of the JUMBO-VISMA WOMEN TEAM Marianne Vos to prevail in the third stage of the Giro d’Italia Donne from Casale Monferrato to Ovada, after 135 km in the Piedmontese lands traveled mostly with unfavorable weather, on a challenging route with four GPM (Mountains Grand Prix). Her wheel beats that of Lucinda Brand (TREK – SEGAFREDO), who takes the initiative 300 meters from the finish line, and of Liane Lippert (TEAM DSM), placed third. For the Dutch cyclist, in the quartet that characterized the lead of the day, this victory, which is her 29th, makes her the most successful athlete in international women’s road cycling.

Statement of the winner: “We are lucky enough to ride a bike, to do what we love. It is very strange to have lost Jolien Verschueren this week to cancer. I asked her, wherever she is, to give me extra strength. This is a special race and I want to dedicate my victory to her”.

Chronicle of the Race – The first 70 km of the race saw the cyclists proceed as a compact group. Winner of the intermediate sprint of the day in Aqui Terme is Georgia Williams. After 71 km from the start, an attempt is performed by Brodie Chapman, the color-bearer of the French team FDJ NOUVELLE-AQUITAINE FUTUROSCOPE, caught after 10 km. A second attempt comes from six runaways, including Lucinda Brand (TREK – SEGAFREDO).

At 50 km from the finish line, the competition heats up. Lucinda Brand and Liane Lippert (DSM TEAM) spring into action. The two runaways are joined by Marianne Vos (JUMBO-VISMA WOMEN TEAM), Elise Chabbey and Harvey Mikayla (CANYON//SRAM RACING), who then loses contact. Behind the four in command, the Maglia Rosa group. On the brow of the last GPM of the day (in Mornese) at 12.4 km the Maglia Rosa group travels 4 minutes late. In the end, it is Mariannne Vos who prevails over the three runaway companions.

Tomorrow, Monday 5 July, the 4th STAGE FORMAZZA FONDOVALLE – FORMAZZA RIALE, CASCATA DEL TOCE is held, that closes the Piedmontese stages of the Giro d’Italia Donne 2021. An intense Individual Time Trial just 11.2 km long, but with an altitude difference of over 500 m which reaches an altitude of 1,714 m (Cima Coppi). The race takes place entirely in the municipality of Formazza, starting in the hamlet of Fondovalle at an altitude of 1,210 m, and then going in the towns of Valdo, at the confluence of the Toce and the Vannino stream, Brendo, where the valley narrows and becomes steeper, and the Cascata del Toce, at an altitude of 1,680 m, one of the most spectacular waterfalls in the Alps with a jump of 143 meters. The finish line is in Riale, the northernmost hamlet of Piedmont, one of the first settlements created by the Walser populations, now dominated by the imposing Morasco dam. This section was covered in 2003 by the nineteenth stage of the men’s Giro d’Italia, the last solo of Marco Pantani’s career. The first cyclist will start at 12 pm.

The 3rd stage can be seen on TV today, Sunday 4 July on Rai Sport HD at 6.55 with the best of the stage in 50’ and on Rai2 with a 10-minute summary during Tour Replay. Tomorrow, Monday 5 July on Eurosport 1, recorded broadcast at 10 am