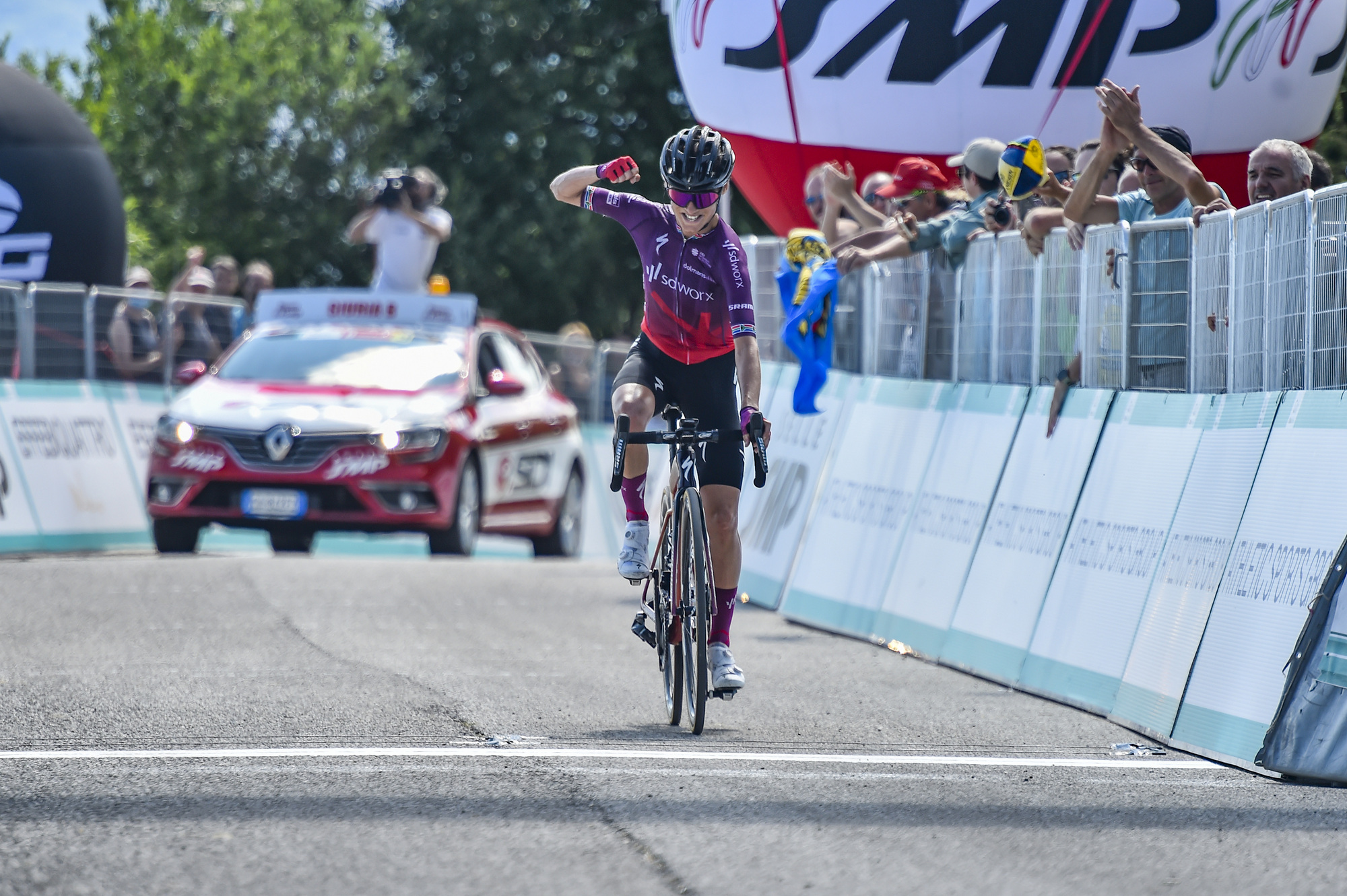 Ashleigh Moolman-Pasio (TEAM SD WORX) prevails in the Queen Stage of the 2021 edition of the Giro d’Italia Donne with a time of 3h52’35”. 122 kilometers traveled starting from Feletto Umberto and arriving in Monte Matajur (Friuli-Venezia Giulia) for a total height difference of 1,124 meters which made this stage the hardest of the international race.

An exciting race with attacks and counterattacks of the protagonists Italian Elisa Longo Borghini (TREK – SEGAFREDO) and Ashleigh Moolman-Pasio (TEAM SD WORX). The duo remained at the head of the race until up to 8 km from the finish line where it is then Moolman-Pasio to bike alone and conquer the summit.

Unsuccessful is the attempt to catch the runaway performed by the trio behind her, formed by her companions Demi Vollering, second on the podium at 1 minute and 26, and by Anna van der Breggen, third at the finish line. Fourth place for Marta Cavalli (FDJ NOUVELLE-AQUITAINE FUTUROSCOPE), first among the Italians and new Maglia Azzurra. The SD WORX TEAM thus repeats the hat-trick recorded on the podium of the 2nd stage Boves-Prato Nevoso.

For Ashleigh Moolman-Pasio, a South African athlete with a degree in chemical engineering and runner-up in the 2018 edition, this is the first victory in the 2021 edition.

The statement of the stage winner, Ashleigh Moolman-Pasio: “It was incredible, this is my tenth Giro and I have never won a stage, I only finished second in the general classification, yet winning a stage is really a special emotion”.

Chronicle of the Race – The 9th stage kicks off at high speed. In the early moments of the race in sight are Letizia Borghesi (AROMITALIA BASSO BIKES VAIANO), Giorgia Vettorello (TOP GIRLS FASSA BORTOLO) and Asia Zontone (SERVETTO – MAKHYMO – BELTRAMI TSA), who passes first on the first GPM of the day. Halfway through, the group’s delay on the three leaders rises to 3’22”. The action of the three runaways is then aborted. New attempt by Ashleigh Moolman-Pasio (TEAM SD WORX) with Elisa Longo Borghini (TREK – SEGAFREDO), who passes first on the second GPM. After 85 km the Maglia Rosa group is 35 units strong: Lucinda Brand (TREK – SEGAFREDO), together with Elise Chabbey (CANYON//SRAM RACING), counterattack the two runaways without success. When there are 25 km left, the advantage of the two leaders, Moolman-Pasio and Longo Borghini, is 1’30”. Behind them, Marta Bastianelli (ALÉ BTC LJUBLJANA) and Anouska Koster (JUMBO-VISMA WOMEN TEAM) break away from the group and chase, but their attempt ends 11 km from the finish line. When there are 8 km left, Longo Borghini pulls ahead but is then caught by the immediate pursuers, and it is Moolman-Pasio who rides alone towards the finish line. Not successful is the attempt of the trio that pursues formed by Anna Van der Breggen, Demi Vollering and Marta Cavalli trying to reach the runaway.

Tomorrow, Sunday 11 July, the 10th AND LAST STAGE from CAPRIVA DEL FRIULI to CORMÒNS. With a stage in the eastern Friuli plain, 113 km, the Giro d’Italia Donne 2021 ends in a border area that has always been characterized by a Central European soul, cultural confluence between the Romance, Slavic and Germanic civilizations. The race consists of a ring that is covered in full once and in a reduced version for the following two times. The journey begins in Capriva del Friuli and continues towards Gorizia, a city divided between Italy and Slovenia, the Collio area, famous for its wine and cherry production, and finally arrives in Cormòns, at the foot of Monte Quarin. The start time of the last stage is at 12.15 pm.