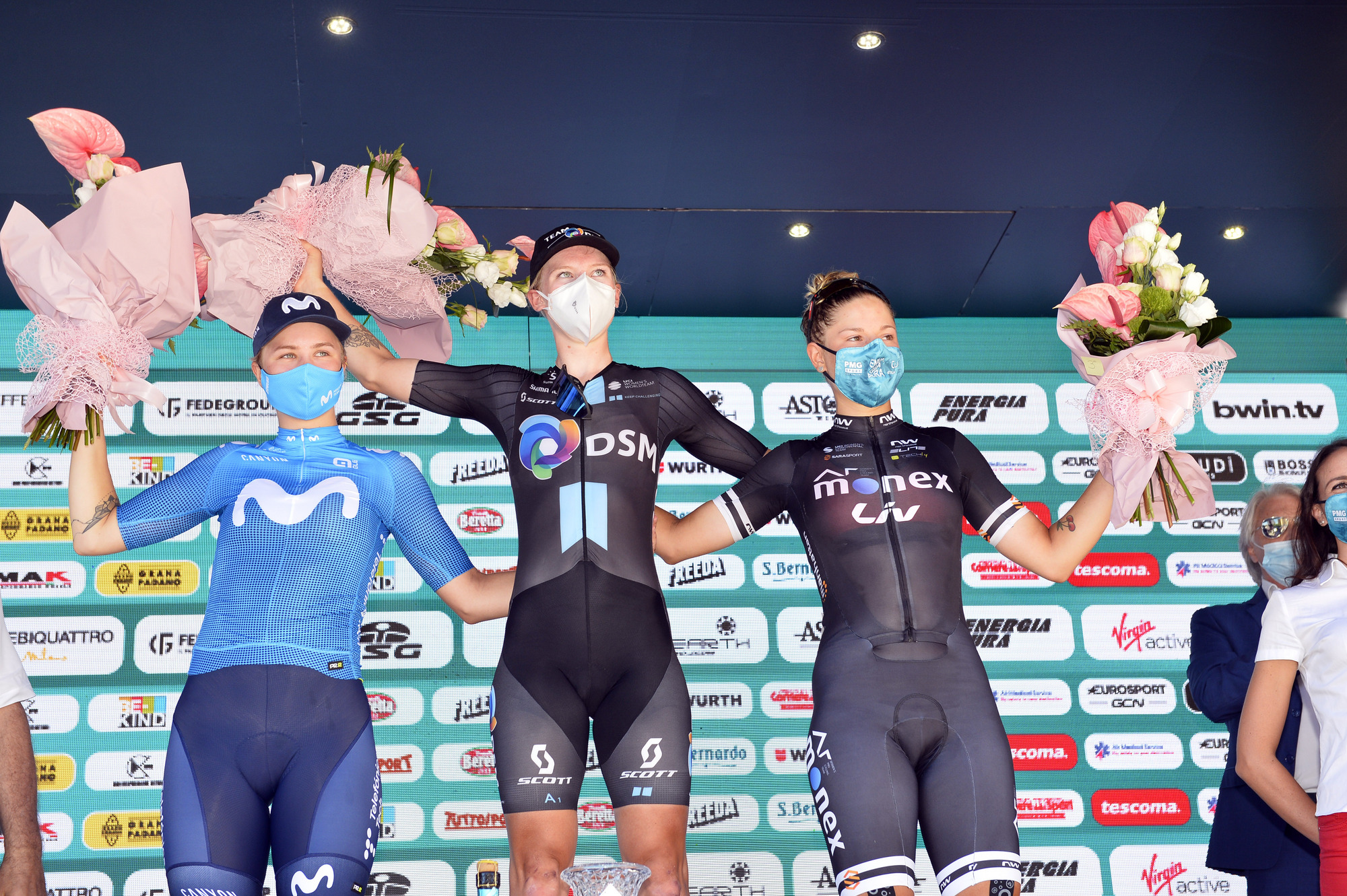 In the final head to head, it is Lorena Wiebes who wins ahead of Emma Norsgaard, placed third is Maria Vittoria Sperotto. Wiebes repeats the success of Carugate. Tomorrow it is the day of Feletto Umberto-Monte Matajur stage, the “queen stage” with the greatest difference in altitude: 1,124 m

The eighth stage of 130 km for sprinters, the only one to cross two regions starting from San Vendemiano (Veneto) and arriving in Mortegliano (Friuli-Venezia Giulia) in a final circuit repeated twice, saw the sprint success of the Lorena Wiebes (TEAM DSM) who prevails in front of Emma Norsgaard (MOVISTAR TEAM WOMEN), place of honor at the finish line. For Lorena Wiebes this success is added to that recorded in the 5th stage with arrival in Carugate and confirms her as the fastest wheel in her first experience in international racing.

The third step of the podium is for the Venetian Maria Vittoria Sperotto (A.R. MONEX WOMEN’S PRO CYCLING TEAM), the second Italian to get on the podium of the 2021 edition after the second place conquered in the 7th stage by Elisa Longo Borghini. The leaders of the rankings do not change, with Anna van der Breggen keeping the head of the General. Today’s stage ended after 3h10’ and was ridden at an average speed of 41,614 km/h.

The statement of winner Lorena Wiebes (DSM TEAM): “Today we were very fast. A crazy sprint. I have to thank my teammate Coryn Rivera who threw me the sprint. I too hope to reach one day the goals of Marianne Vos”.

On the stage of the 8th leg of the Giro d’Italia Donne 2021, is also Deyanira, mother of the seventeen-year-old Friulian Silvia Piccini who lost her life in April due to a road accident while training. On this occasion, Mum Deyanira invited everyone to be extremely careful and to respect road rules.

Chronicle of the Race – The group is compact at the start where the athletes Marta Lach (CERATIZIT – WNT PRO CYCLING TEAM) and Heidi Franz (RALLY CYCLING) are very active. After the accelerations of Michaela Drummond (BEPINK) and Giorgia Vettorello (TOP GIRLS FASSA BORTOLO), caught at km 35, it is the turn of the attempt by Giorgia Bariani (TOP GIRLS FASSA BORTOLO), Natalia Studenikina (BORN TO WIN G20 AMBEDO), Alice Maria Arzuffi (VALCAR – TRAVEL & SERVICE) and Valentina Scandolara (AROMITALIA BASSO BIKES VAIANO), then caught by the group.

But it is with the new attempt by Anastasia Carbonari (BORN TO WIN G20 AMBEDO), followed by Vettorello and Studenikina that the race finds its runaways. At km 75 the three leaders register an advantage of 2’36” which rises to 3’08” when there are 50 km left. At the start of the last lap, 20 km from the finish line, the three leaders travel 1’34” ahead of the group. Great work by the Movistar and DSM teams who finish on the leaders at 6.5 km from the finish line. In the last 2 km, the Movistar Team sets the pace at the head of the group. It is head to head in the last 500 meters between Lorena Wiebes (TEAM DSM) and Emma Norsgaard (MOVISTAR TEAM WOMEN). Who finally wins is the Dutch athlete who repeats the success recorded in Carugate. Falls for the athletes Amanda Spratt and Grace Brown (TEAM BIKEEXCHANGE) 5 km from the finish line.

Tomorrow, Saturday 10 July, 9TH STAGE from FELETTO UMBERTO to MONTE MATAJUR. It is a stage with the greatest difference in height between start and finish, 1,124 m, in a 120 km-long route. It starts from Feletto Umberto at an altitude of 143 m, at 12.05 pm, and crosses the eastern Friuli plain, moving first towards Tavagnacco and then in the northern outskirts of Udine, where the first ring of the stage that reaches Attimis in the hills of Povoletto begins, the first demanding climb of the race, and Nimis, an area renowned for its wine production. At Cividale del Friuli, a monument city of Lombard civilization in Italy and a UNESCO World Heritage Site, the second ring of the race begins which leads, with a strong climb made up of numerous turns, towards Stregna and Prepotto. Then, the stage heads towards the border with Slovenia, the scene of the battles of World War I between Italians and Austrians, starting in Savogna the climb that leads to the final destination, Mount Matajur, at an altitude of 1,267 m.

The 8th stage can be seen on TV today, Friday 9 July on Rai Sport HD at 10pm with the best of the stage in 50’ e on Rai2 with 10-minute summary during Tour Replay. Tomorrow, Saturday 10 July on Eurosport 1, recorded broadcast at 10:00 am