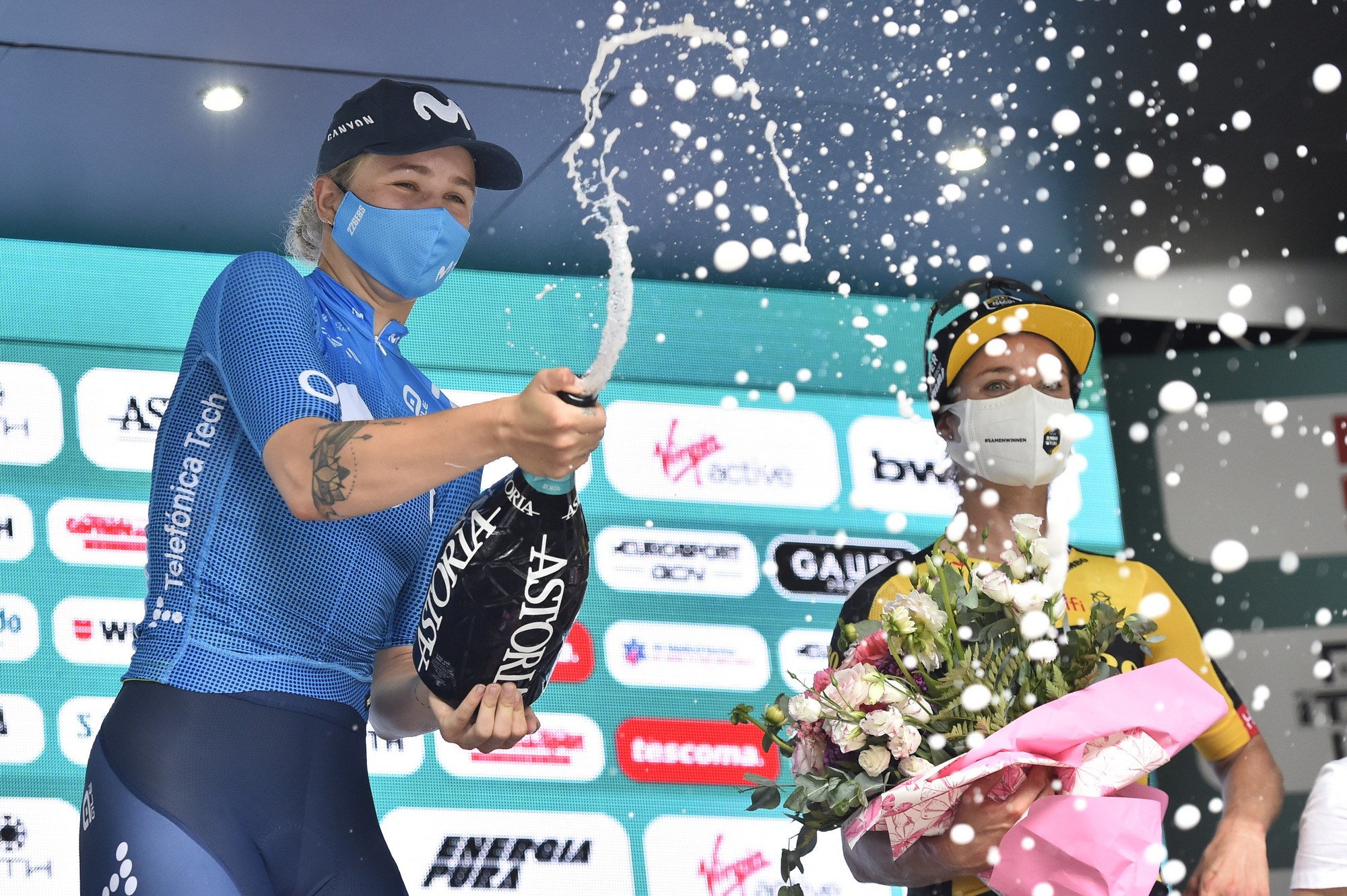 Emma Cecilie Jørgensen strikes everyone at the finish line in Colico. Coryn Rivera and Marianne Vos are placed second and third respectively. Van der Breggen is the leader in Maglia Rosa, while Marianne Vos is new Maglia Ciclamino. Tomorrow is the day for another demanding stage, the last one in Lombardy, on an uneven route of 109.6 km from Soprazzocco di Gavardo to Puegnago del Garda, in a loop to be repeated five times with a total of five GMPs

Noteworthy is the action of the day by Italian Elisa Longo Borghini (TREK – SEGAFREDO) and South African Ashleigh Moolman-Pasio (TEAM SD WORX). They are the two attackers of the 6th stage: fleeing from km 63 they are caught by the group at 13 km from the finish line.

The winner’s statement: “It couldn’t have gone better. I thank the team who did a wonderful job, it is the result of an excellent team work. I really like the Giro, the goal for the next few days is to hit another victory or at least another podium”.

Chronicle of the Race – It is Lauren Stephens (TEAM TIBCO – SILICON VALLEY BANK) who, after 48 km, made the first acceleration of the day, caught by the group at the 53rd km. After 63 km, two athletes are leading: Italian Elisa Longo Borghini (TREK – SEGAFREDO) and South African Ashleigh Moolman-Pasio (TEAM SD WORX). Behind them the split group follows. The athletes of the JUMBO-VISMA WOMEN TEAM, TEAM BIKEEXCHANGE and MOVISTAR TEAM are very active in an attempt to get the better of the two pacemakers. Halfway through the route, the two runaways register a 37” advantage over the group that is compact again. An advantage to be increased and which reaches its peak when there are 50 km to go: 2’25”. The TEAM DSM athletes, the team of Lorena Wiebes who won yesterday’s stage in the sprint, set the pace in the group that is chasing. When there are 20 km left, Elisa Longo Borghini and Ashleigh Moolman-Pasio’s advantage drops at 55” and are then caught at 13 km from the finish line. The athletes of the JUMBO-VISMA WOMEN TEAM and the SD WORX TEAM set the pace of the group with the forcing in the last km of the race by Elisa Longo Borghini (TREK – SEGAFREDO). But it is Emma Cecilie Jørgensen (MOVISTAR TEAM WOMEN) who has the better of the group.

The Maglia Bianca, Niamh Fisher-Black (SDW – TEAM SD WORX), manages to rejoin the group after getting a puncture. A stage characterized by some falls that involved some athletes: BIZKAIA – DURANGO’s color-bearer Emilie Fortin decides to pull out. Andrea Ramírez Fregoso (MONEX WOMEN’S PRO CYCLING TEAM) also has pulled out.

Tomorrow, Thursday 8 July, the 7th STAGE from SOPRAZZOCCO DI GAVARDO to PUEGNAGO del GARDA starts at 12.15 pm. This is the stage that concludes the Lombard itinerary of the Giro d’Italia Donne 2021, a 110 km-long competition in the province of Brescia. It starts at an altitude of 272 m in Soprazocco di Gavardo, in the western area of ​​Lake Garda located between the Benaco and the morainic hills. After passing through Muscoline, the stage heads towards the Valtenesi area, also famous for the production of the homonymous DOC wine, and Lake Garda. In Polpenazze sul Garda, it enters a 5-lap ring that touches Manerba del Garda and San Felice del Benaco, a land that still preserves the ancient testimonies of 4,000 years ago of the Palafitte Civilization, and finally arrives at the finish line in Puegnago del Garda at an altitude of 219 m.

The 6th stage can be seen on TV today, Wednesday 7 July on Rai Sport HD at 8:55pm with the best of the stage in 50’ e on Rai2 with 10-minute summary during Tour Replay. Tomorrow, Thursday 8 July on Eurosport 1, recorded broadcast at 11.10 am