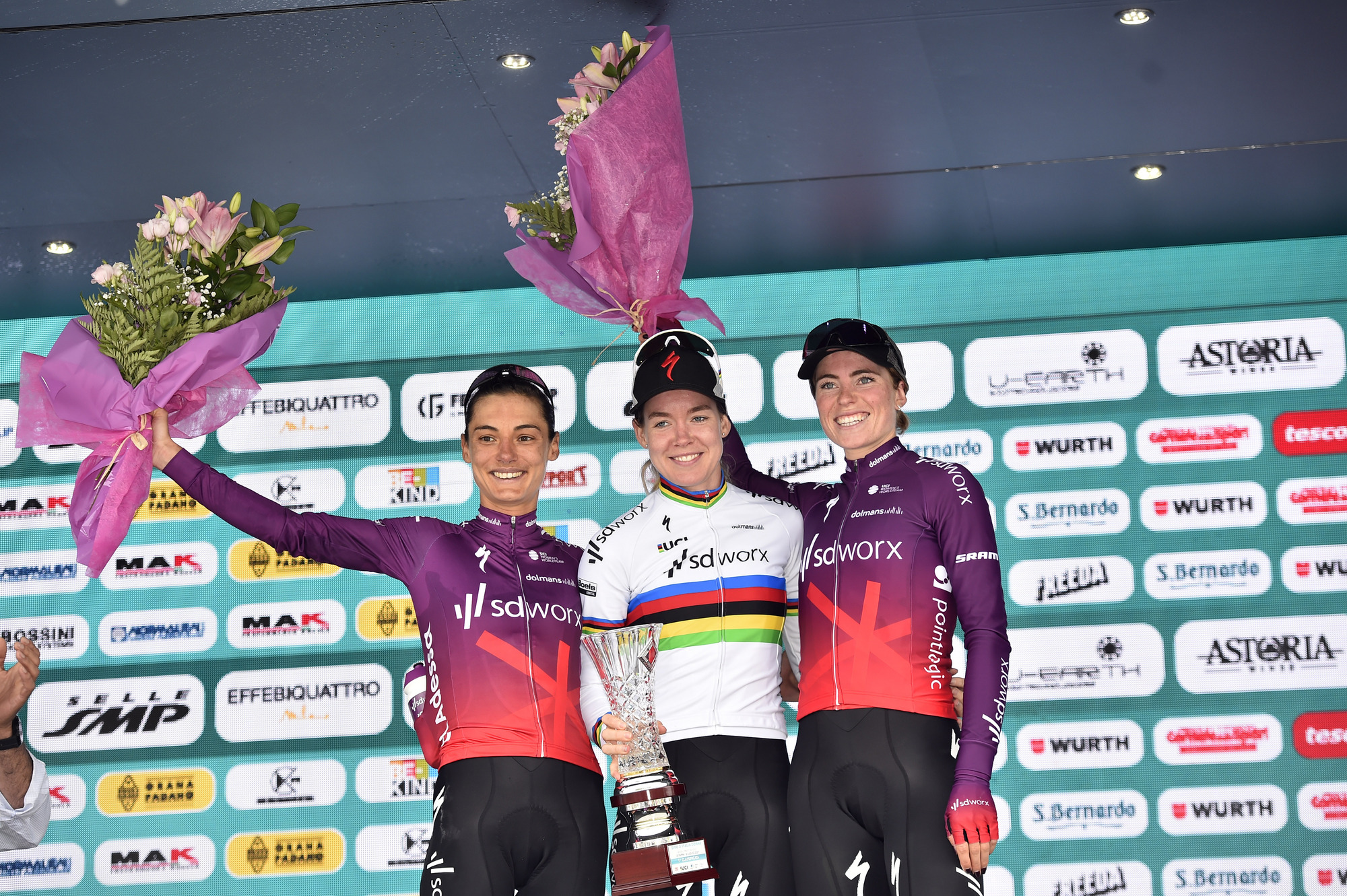 It is Anna van der Breggen (SDW – TEAM SD WORX), the new Maglia Rosa, who flies along the climb to Prato Nevoso, arrival of the second stage of the Giro d’Italia Donne, which started from Boves. A hard, very challenging stage with arrival at an altitude of 1.607 after 100 km. On an all SDW – TEAM SD WORX podium, the world champion takes the stage victory in 2h 58’31 at 1’22” from Ashleigh Moolman-Pasio and at 1’51” from Demi Vollering. Fourth place for the Italian Marta Cavalli (FDJ NOUVELLE-AQUITAINE FUTUROSCOPE).

On the shoulders of the world champion also the Maglia Verde and Ciclamino. The Maglia Bianca is reconfirmed to Niamh Fisher-Black (SDW – TEAM SD WORX), while the Maglia Azzurra goes to Erica Magnaldi (WNT – CERATIZIT – WNT PRO CYCLING TEAM).

The statement of the winner/Maglia Rosa Anna van der Breggen: “The result was excellent, with a really difficult climb. It was a great struggle. Today I tried to take as much time as possible, also thinking of tomorrow’s stage which is easier to deal with. It is fantastic that my team has conquered the entire podium”.

Chronicle of the Race – After the GPM of the day (Level 3 Mountains Grand Prix at Colle del Morte) when there are 34 km left, a group of four fugitives is formed including Elise Chabbey (CSR – CANYON//SRAM RACING), Kathrin Hammes (WNT PRO CYCLING TEAM), Sofia Bertizzolo (LIV – LIV RACING) and Coryn RIvera (DSM – TEAM DSM), then caught at 15 km from the finish. The group, once again compact at the beginning of the climb that leads to Prato Nevoso, increases the pace and splits up. When there are 10 km from the group, Niamh Fisher-Black (SDW – TEAM SD WORX) tries the action, followed by Erica Magnaldi (WNT – CERATIZIT – WNT PRO CYCLING TEAM). Anna van der Breggen (SDW – TEAM SD WORX) does not miss the opportunity and takes the initiative that will lead her to conquer the stage taking away from Ruth Winder the lead of the general ranking. The Dutch cyclist also wears the Maglia Verde and Ciclamino. The duel for third place is to be highlighted, between the Italian Marta Cavalli (FDJ NOUVELLE-AQUITAINE FUTUROSCOPE), and the Dutch Demi Vollering (SDW – TEAM SD WORX) who then prevailed.

Tomorrow, Sunday 4 July, the 3rd STAGE starts from Casale Monferrrato (166 m) at 12.05 pm, the historical capital of the Basso Monferrato, and arrives in Ovada (186 m). The hamlet is characterized by four level 3 GMPs and extends for 135 km along the hills of Monferrato, an area with a great winemaking vocation that became a UNESCO World Heritage Site in 2014. From Casale Monferrato, we then go to the Municipalities of Mirabello Monferrato, San Salvatore Monferrato and Castelletto Monferrato to get to Alessandria, the largest municipality in Piedmont that preserves, on the banks of the Tanaro, one of the largest military fortresses in Europe still intact. We continue towards Acqui Terme, in the Alto Monferrato, renowned for the Bracchetti d’Acqui and its thermal waters, where the route begins to get more challenging with a series of ups and downs between Belforte Monferrato and Tagliolo Monferrato, located in the Stura valley, and the municipality of Mornese, belonging to the Capanne di Marcarolo Regional Park. The climbs end in Ovada, a town characterized by a typically Ligurian imprint

The 2nd stage can be seen on TV today, Saturday 3 July on:

Tomorrow, Sunday 4th July on Eurosport 1, recorded broadcast at 10.15 am