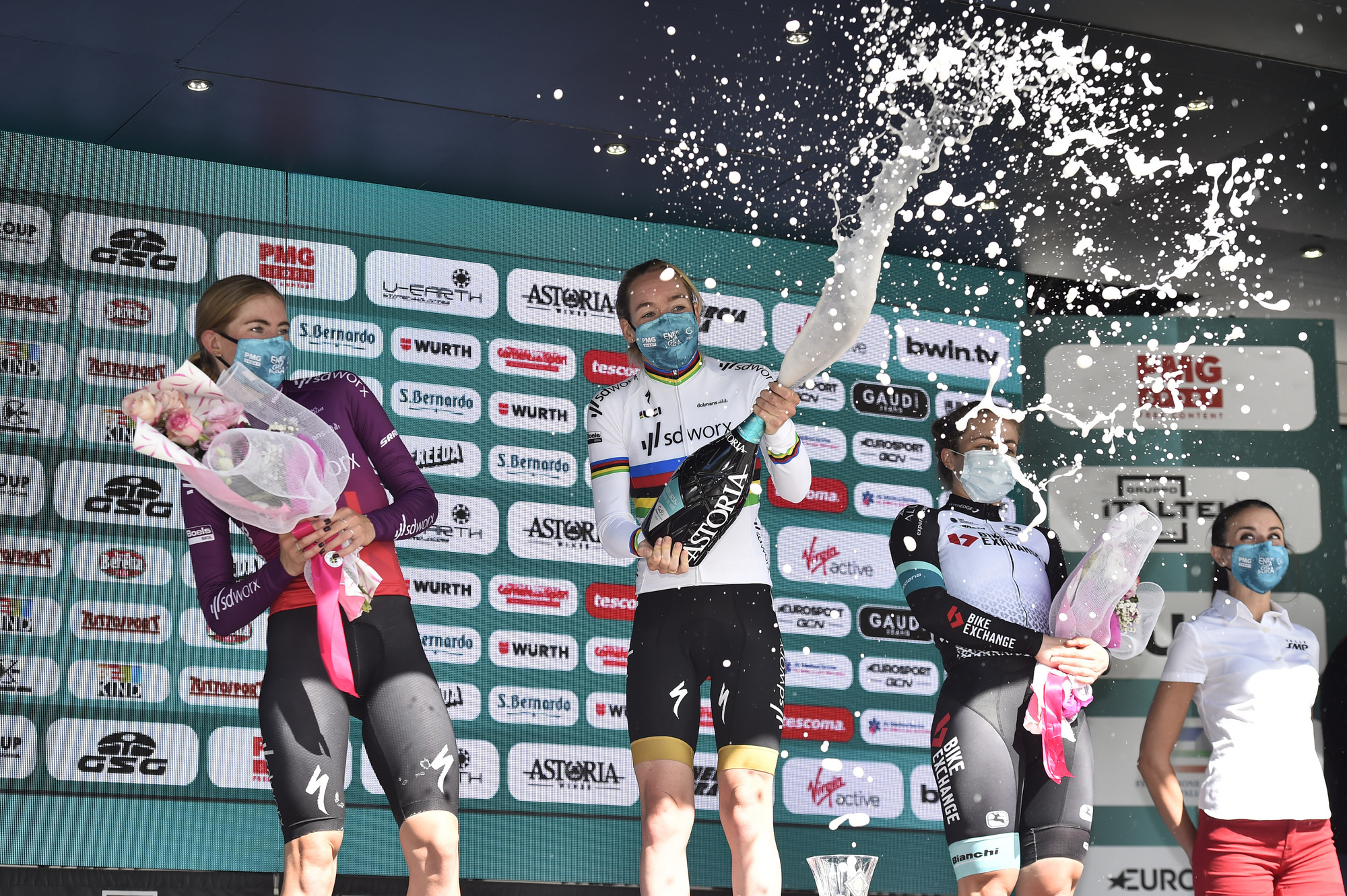 Lorena Wiebes wins in the sprint ahead of Emma Cecilie Jørgensen placed second and Marienne Vos placed third. Anna van der Breggen is still the leader of general classification. Tomorrow there will be the second Lombard stage, along Lake Como, starting and arriving in Colico: a 155 km uneven and challenging route that makes it the longest of the edition

Lorena Wiebes (TEAM DSM) wins the 5th stage, from Milan to Carugate, the first stage for sprinters that marks the entry of the international race in Lombardy. After 122 km of a flat route, which started in the heart of Milan and ended after four laps of the circuit in Carugate, the winner crossed the finish line first by imposing herself in a sprint ahead of Emma Cecilie Jørgensen (MOVISTAR TEAM WOMEN), placed second and Marianne Vos (JUMBO-VISMA WOMEN TEAM) placed third on the finish line. Worth mentioning is the placement of five Italians among the top ten: 5th is Marta Bastianelli (ALÉ BTC LJUBLJANA), 6th is Maria Giulia Confalonieri (WNT PRO CYCLING TEAM), 7th. is Sofia Bertizzolo (LIV RACING), 8th is Eleonora Camilla Gasparrini (VALCAR – TRAVEL & SERVICE), 9th is Maria Vittoria Sperotto (MONEX WOMEN’S PRO CYCLING TEAM).

The winner’s statement: “For me it is the first Giro d’Italia Donne and I like it very much. Today the team was impeccable in a stage in line with my characteristics. I am happy to have complied with the predictions that gave me as the favorite. With tomorrow’s stage we will work for Coryn Rivera”.

When the last of the four laps is to be ridden, the athletes of Movistar and Team DSM are very active in the chasing group in an attempt to get back on the runaways. With less than 20 km to the finish line, the group’s delay is reduced to 58”. At 15 km from the finish line, we see Mariia Novolodskaia’s attempt  which leads her to buy time and road from her runaway companions (5”). Meanwhile, the chasing group is getting closer and closer.

Then the CANYON //SRAM RACING athletes go against the head of the group and duel with the DSM TEAM, both ready to launch their respective sprinters. At the finish line Lorena Wiebes, color-bearer of the DSM TEAM, gets the better of the stage. A fast one, ridden at an average speed of 42,575 km/h in 2h49’15”.

Tomorrow, Wednesday 7 July, the 6th STAGE is held, starting (at 11.05 am) and arriving in COLICO whereLake Como is the absolute protagonist. This stage is the longest of the 2021 edition: a 155 km loop of continuous ups and downs that run along the entire Lario, between water and mountains in the provinces of Como and Lecco. From Gera Lario, in the Pian di Spagna Nature Reserve, where Lake Como, Valtellina and Valchiavenna meet, the route goes towards the Como shore of the lake, traveling in the famous Strada Regina in Menaggio, which also touches the municipalities of Tremezzo, Argegno, Brienno and Cernobbio. After entering Como, the race continues on the coast of the Larian triangle and arrives first in Bellagio, the pearl of the Lario, and then in Lecco, to then go up again towards the villages of Abbadia, Varenna, Bellano and finally Colico, the finish line that closes the ring stage.

The 5th stage can be seen on TV today, Tuesday 6 July on Rai Sport HD, at 8.55 pm with the best of the stage in 50’, available also on RaiPlay, and on Rai2 with a summary during Tour Replay. Tomorrow, Wednesday 7 July on Eurosport 1, recorded broadcast at 9.30 am.