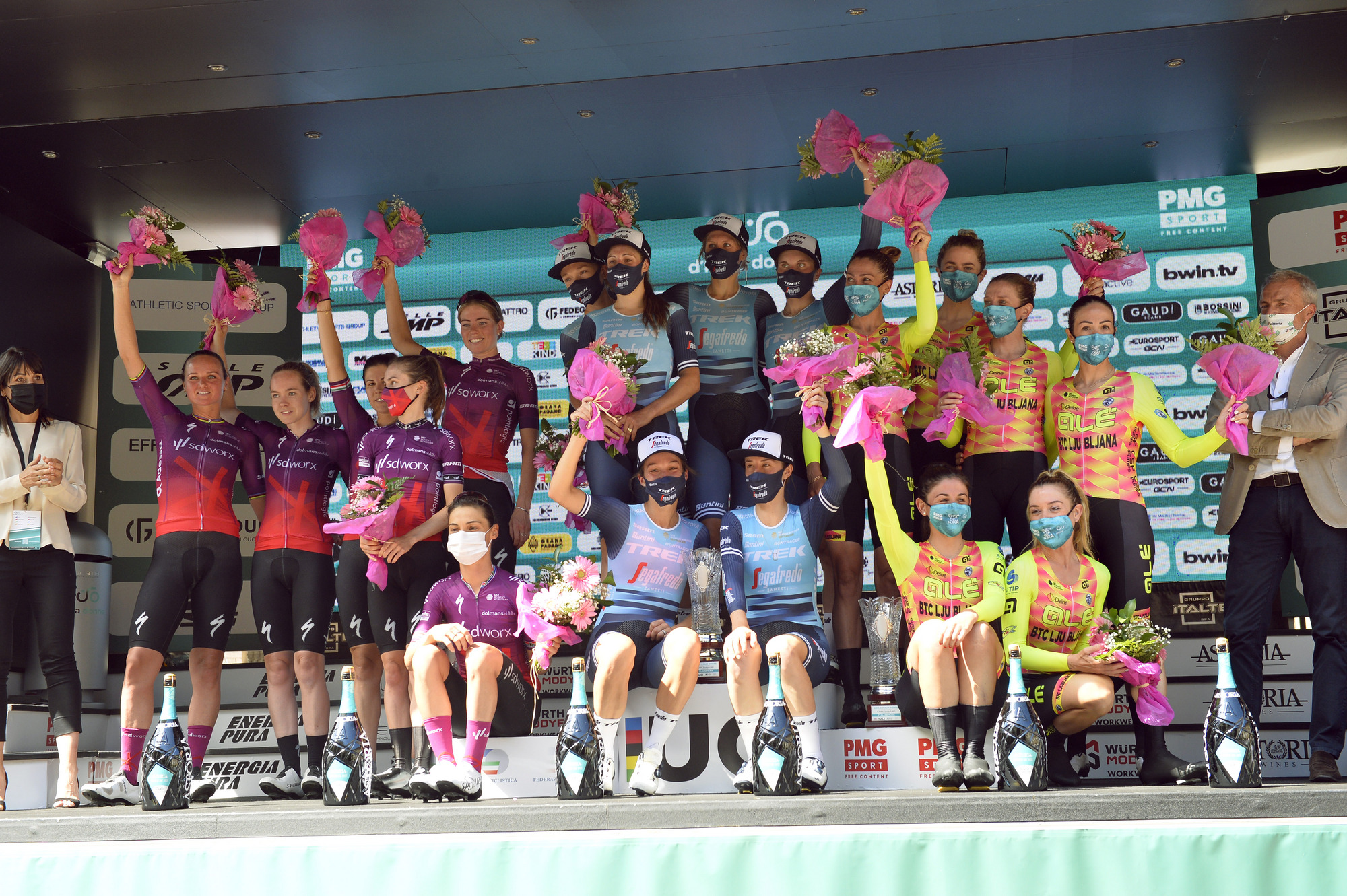 The US Team repeats the success of the 2020 edition. In second place the SD WORX team and in third place the Italian team ALÉ BTC LJUBLJANA, respectively at 7” and 39”. Starting tomorrow the climbing stages begin with the Boves/Prato Nevoso stage, with an altitude difference of over 1000 m and the arrival at an altitude of 1,470 m

With a time of 33’40”80 and an average speed of 47.565 km/h, the American team Trek-Segafredo wins the first stage of the 32nd edition of the Giro d’Italia Donne, a team time trial of 26.7 km from Fossano to Cuneo. The first Maglia Rosa goes to the American Ruth Winder.

At 7”80 is the SD Worx team of world champion Anna van der Breggen, while placed third at 39”40 is the Italian team ALÉ BTC LJUBLJANA. For the US team it is a success that repeats that of the 2020 edition and that this year also wins the top of the Maglia Azzurra classification, best Italian, awarded to Elisa Longo Borghini.

The statement of the Maglia Rosa: “I still don’t believe it. I wasn’t expecting that at all and I wasn’t planning on crossing the finish line first. We just thought about going as fast as possible. I am happy, we have saved our leader, Elisa Longo Borghini, precious time ”.

Chronicle of the Race – The fraction that inaugurated the 2021 edition of the most prestigious international stage race, hosted the 24 best teams in the world that from the center of Fossano to Cuneo rode along the Stura di Demonte river, across a not particularly hard 26.7 km-long route but with the road gradually climbing. The Team led by the two-time road world champion, Giorgia Bronzini, who, right from the start, hit the gas, recording the best split time 15’50” at km 13, despite the two athletes Lucinda Brand and Tayler Wiles pulled ahead before the arrival.

For the US Team it is a success that is repeated after the winning of the opening stage in the 2020 edition.

Tomorrow, Saturday 3rd July, the 2nd STAGE, tough and high demanding for climbers, will start at 12.10 pm from BOVES (600 m) and arrive in PRATO NEVOSO (1607 m), over a distance of 100.1 km. From Eastern Piedmont, along the territory of Peveragno, famous for its native variety of strawberries, Chiusa di Pesio, crossed by the homonymous stream, and Roccaforte Mondovì, where it is possible to admire a fresco dating back to the Romanesque-Byzantine period at the Pieve di San Maurizio. The aforementioned territories, together with Villanova Mondovì and Frabosa Sottana, are part of the municipalities belonging to the Occitan linguistic minority. The final destination of the route is the famous Prato Nevoso ski resort, at an altitude of 1,470 m.

The 1st stage can be seen on TV today, Friday 2 July on:

Tomorrow, Saturday 3 July on Eurosport 1, recorded broadcast at 11 am