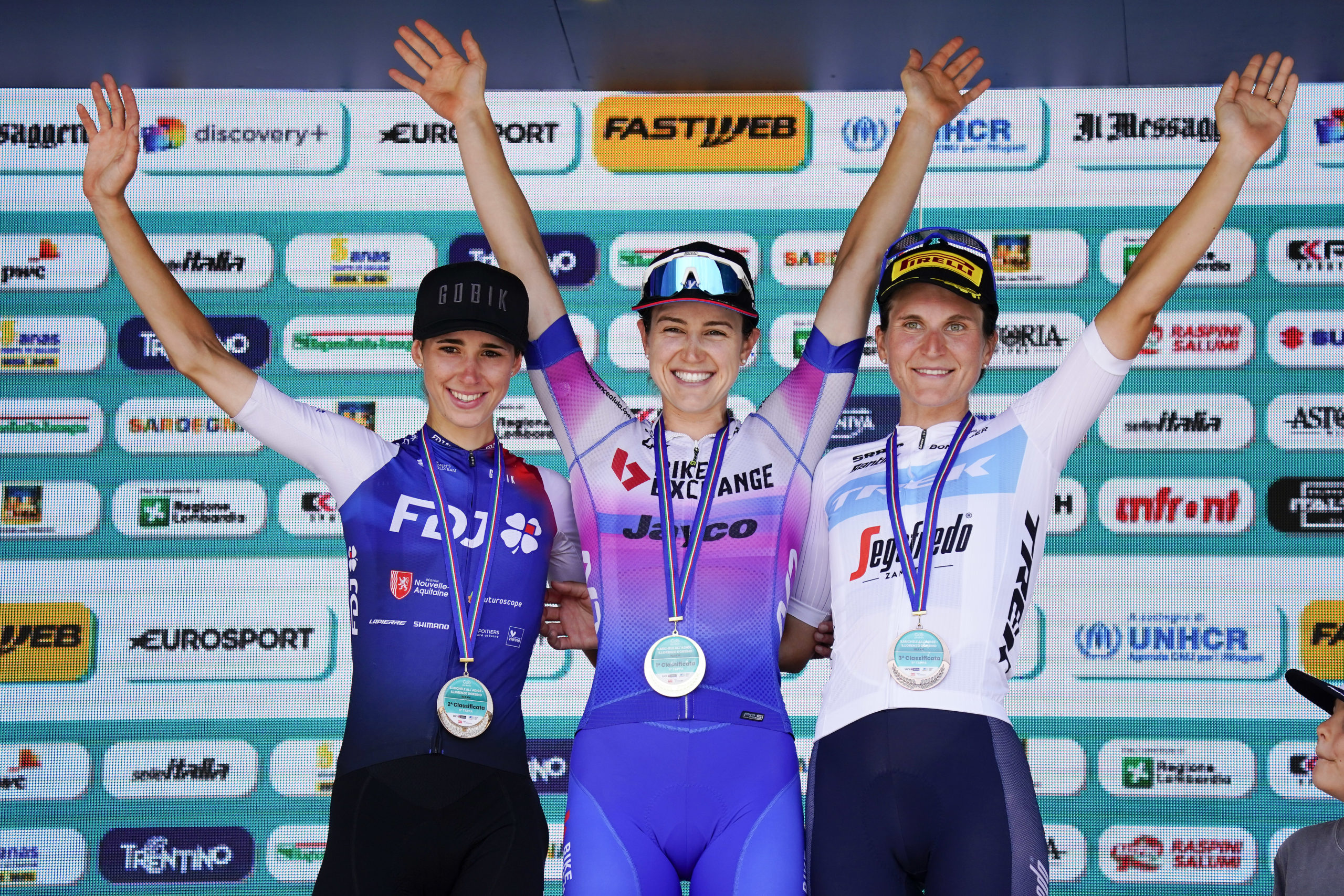 Queen Stage and “Cima Coppi” goes to the American athlete, signing her second victory at Giro and taking the Green Jersey; White Jersey confirmed for Niamh Fisher-Black and Blue for Marta Cavalli

The 1992-born American champion, after the individual time trial in Cagliari on 30th June, wins her second stage of this year’s Giro, the 112.8-km long “San Michele all’Adige – San Lorenzo Dorsino”, penultimate race before tomorrow’s grand finale, with a time of 3:36:36, 59’’ ahead of Marta Cavalli and 1’14’’ from Longo Borghini and Van Vleuten, also earning the Green Jersey after winning all 3 MGP for today. White Jersey confirmed for Niamh Fisher-Black (SD WORX) while Marta Cavalli keeps the Blue.

Regarding the general classification: Annemiek van Vleuten still dominates with a 1’52’’ advantage on Marta Cavalli, a 6’10’’ advantage on Mavi Garcia Cañellas (UAE TEAM ADQ) while staying ahead of Elisa Longo Borghini by 6’59’’; the general Top 10 also features Silvia Persico and Erica Magnaldi, the latter ranking eighth.

Stage winner Kristen Faulkner declares: “Last year I was always in the rear, this year is a very special Giro Donne for me. I wanted to deliver all my best not just for personal glory but mostly for my team who keeps doing an amazing job. After yesterday’s escape I wanted to continue, I felt in good shape and I managed to keep the distance between me and the other contestants while performing at my best. It’s hard to ask for more when it comes to tomorrow, I will try to help out my fellow teammates who are better suited for acceleration-based victories”.

Realini and Faulkner faced the climb of Passo Daone at -32 km from the goal, with an average gradient of 10.9% and a maximum of 18.1%, with a gap of about 2 minutes from the 4 pursuers and almost 4 minutes from the Pink Jersey bunch, from which Marta Cavalli, Annemiek van Vleuten and Mavi Garcia Cañellas left at -30 km, the latter eventually lagging behind. Faulkner was left alone to face and seize the third and last MGP, a 1st-tier, at an altitude of 1291 meters at km 86.9. At -16 km the pursuers are composed by Cavalli, Van Vleuten and Elisa Longo Borghini (TREK SEGAFREDO), who caught up with Gaia Realini and shortened the distance to -1 minute and 40’’ with Faulkner.

Tomorrow Sunday 10th July Giro Donne reaches its climax in Veneto with the 90.5-km long race of “Abano Terme – Padua”. The tenth stage thus starts in Abano Terme at 11.50 am at an altitude of 14 meters and then crosses the Euganean Hills until reaching Padua, where the winner of this edition will be dressed in pink.

After the starting shot, the race heads west and south, staying level for 17 km before tackling a climb which leads to a 3rd-tier Mountain Grand Prix in Rovolon at 151 m above sea level at km 21.7. With a descent towards Zovon, a hamlet of Vo’, at km 30 the race returns to flat level, entering the municipalities of Cinto Euganeo, Este, Baone, Monselice, Galzignano Terme, Torreglia and Montegrotto Terme. A panoramic route, with a Traguardo Volante (flying finish line) at km 44.7, allowing us to admire the gorgeous views of the Hills. The arrival time is estimated at approximately 2.15 pm at Prato della Valle in Padua.

Follow the updates and feel the thrills of Giro Donne 2022 on the official channels: